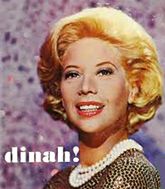 简介
Dinah's show premiered 9 September 1974 and continued through to 4 September 1981. She started out the 70's with Dinah's Place which usually featured one guest and was more of a home oriented show about cooking, crafts and occasionally music. This format lasted until May of 1974. When the show came back in October of 1974 the format had changed drastically to a variety talk show which was called Dinah. and went on until 1981. This show was also known as "Dinah and Friends" during the summer of 1976.